So as we move on to the third installment of Cypher Shadowrun we move to running the Matrix. Essentially running the matrix is no different from any other skill based series of Tasks in the Cypher System.  The world moves faster and instead placing added rules to represent this we just handle this aspect of the game in RP. There are really only a few things that we need to consider when you are jacked in.

You have to understand the Matrix the way it is represented in Shadowrun to know how fully use it in your game. Here is a quick run down on what the Matrix is and how it works and is seen by your players.

The Matrix is the term the worldwide computer network it is as a completely Virtual Reality, icon and graphics based network, because this was the only way the sheer amount of data traffic could be handled. The entire Matrix is composed of various Host Systems. People interact with this Matrix by using terminals or cyberdecks.

Think of it this way. The Matrix is the term for all web-based content. Just like we use the internet today but on a much more massive and virtual scale. Inside the Matrix you have Nodes. These Nodes are the files and servers of corporations as well as environments that the player sees and interacts with.

You can travel from one travel from one Node to another via Portals. Portals are how all things are connected in the Matrix. Most Portals are wireless access, some need high-end fiber optic connection and occasionally the only way to a Portal is via satellite up-link.

Corporations and anyone wishing to keep up security in their Nodes implement IC for the protection of their data. There are many forms of IC out there ranging from low-level White IC to Deadly Black IC. 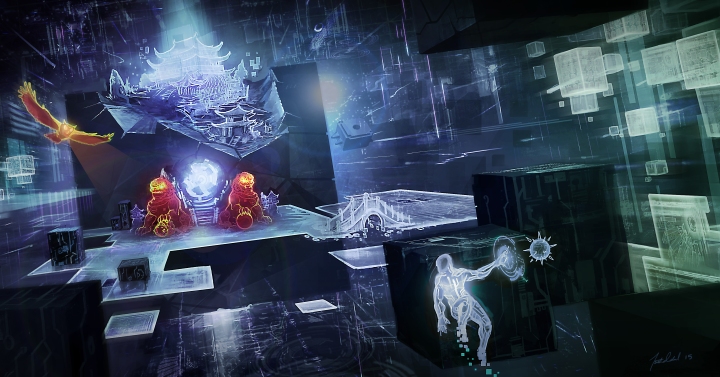 While in the Matrix the player only has one ability pool in play with. The exception is when a player encounters Black ICE. All tasks are resolved with the player INT pool. Effort spent on tasks comes from the players INT pool as well as any damage the player receives is deducted from their INT pool. IC & Black ICE are programs that were created to give security in the Matrix as well as deter and in some cases like Black ICE even kill those foolish enough to attempt to bypass them. If a players INT pool is reduced to 0 he drops one down on the damage track and is stunned from the “Dump”

Cyberdecks do a few things for a Decker in the Cypher system. Decks are able to slot cypher “Programs” that the player may use while in the Matrix. essentially a cyberdeck is the equivalent of a cypher bag from Numenera with a few exceptions. Once a cypher is slotted into a cyberdeck it is considered downloaded into the Deck and can not be removed. If a Decker wishes to overwrite an active program all he need do is plug-in a new cypher program. The player may choose what program is overwritten if a new one is slotted into the deck.

Once a “Cypher Program” is slotted into the Deck It is considered expended. It may not be removed from the deck. Cypher Decks have a separate Cypher Program limit that may take players beyond their normal maximum. (much like cypher chest artifacts)

To upload a new software cypher program to the deck, the player must log out of the Net and upload the program before they may return to the Net.

So Chummer you want to work the Matrix, well you better get a Deck.

Cyberdecks are the tools of the trade for matrix savvy Shadowruners. They give runners remote access to high-end computer processing power. Allowing on location hacking to overcome security systems as well as defeat IC and gather data stored out of Meatspace and in the Matrix.

All decks are treated as Assets in any Matrix based task.

Sony Cty-360
The first deck made for shadowrunners. Simple, street ready and nearly indestructible.
Protection: 0 the Sony offers no defensive protection to the Runner
Programs: (cyphers): 1 Cypher may be uploaded into this deck at a time
Damage:  2
Other Perks: None
Cost: inexpensive

Renraku Krafwerk-1
Renraku’s best deck and easily modified for the streets.
Protection: 1 armor vs Attacks
Programs: (Cyphers) 2 cyphers may be uploaded into this deck at a time.
Damage: 2
Other Perks: Has up to 1 Perk
Cost: Moderate

Fuchi VirtualX
Fuchi Created the VirtuaX for employees. Now decker love to use it against them.
Protection: 2 armor vs Attacks 4 Int Pool Buffer. Restores on reboot.
Programs:(cyphers) 2 Cyphers may be uploaded to this deck at a time.
Damage: 3
Other Perks: Has up to 2 Perks
Cost: Expensive

Novatech Slimcase-10
Tailored for aggressive decking, the slimcase has an upgraded basic attack but with a lower defense
Protection: 1 Armor vs attacks & Int Pool  Buffer of 6. Restores on Reboot
Programs: (Cyphers) 3 cyphers may be uploaded to this deck at a time
Damage: 4
Other Perks: Has up to 3 perks
Cost: Very Expensive

Tyansys Highlander
This high-end deck by Transys has a higher rating then the competition.
Protection: 3 Armor vs Attacks & Int Pool Buffer of 8
Programs: (Cyphers) 3 cyphers may be uploaded to this deck at a time
Damage: 4
Other Perks: Has up to 4 Perks
Cost: Exorbitant

Fairlight Excalibur
The Deck that every Decker Dreams about the Holy Grail of Cyberdecks.
Protection: 3 Armor vs Attacks as well as an Int Pool of 10
Programs: (Cyphers) 4 cyphers may be uploaded to this deck at a time
Damage: 6
Other Perks: Has 4 Perks
Cost: Artifact

Decker’s like to personalize their cyberdecks. This gives them added functionality in the Matrix as well as in the real world coined by many as “Meatspace”. Here are some Perks you can add to your Deck.

Vehicle Control Rig
Control Rigs allow the Decker to pilot any vehicle with a remote Rig receiver.
Rig receiver’s often need to be directly jacked into to use. Decks with VCR’s allow the operator to use their deck as an asset for driving and piloting checks.
Cost: Moderate for the Rig
Cost: Inexpensive for the receiver. It just takes ten min to install the receiver.

Drone  Control Rig
A Drone Rig perk allows the Rigger to command one Drone per perk. Drone Control Rigs need  to dedicate a lot of power to the running of drones. For each Drone Rig perk installed in a cyberdecks, all Matrix related Task difficulty are increased by one step.
Cost: Varies by Drone.

Int Buffer
Int Buffer perks provide some added protection to the runner while in the Matrix. This perk may be purchased more than once. The effects of this perk stack. You may not use this perk to gain more than double the default Int buffer of your existing Deck with this perk. Each Int Buffer perk purchased provides and additional 3 Points of Int Pool per purchase.
Cost: Moderate

Armor Enhancer
Armor Enhancer perks add one level of armor to the cyberdeck while in the Matrix.
This enhancement may not raise the Armor of a cyberdeck above a total 3 Armor.
Cost: Moderate

Drones come in two Styles, Surveillance and Support drones. Each of these has air and ground types. All drones are available in three chassis. Light, medium and Heavy. A Drone  can be used as an Asset if he succeeds on a task roll he may opt to use any of the drones appropriate weapon systems instead of his own. Drones are Assets a player may spend Intellect for effort on drone tasks.

When using drones they provide the controller the benefit of an asset in any tasks where using the drone can assist or benefit the player. 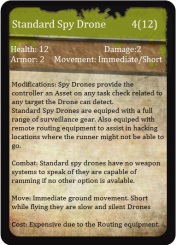 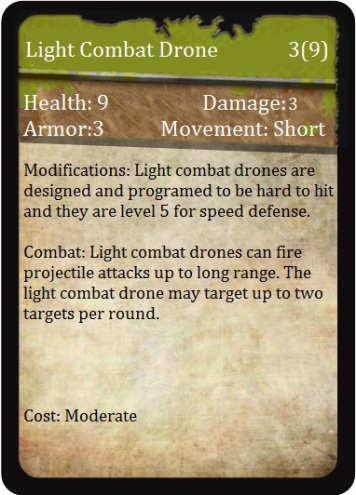 Next time…
Types of IC & what they protect.