Cyberwear in the Cypher System

So the other day I sat down and was looking at starting up a Shadowrun style Cypher System game. There were only a few things that needed to be done to fit Shadowrun in Cypher System. The first issue was how to approach cybernetics. Now I could easily place cybernetics as artifacts in the Cypher System. This would work fine, but artifacts are intended to be more powerful than standard equipment and not for sale as they should be harder to come by than average equipment. In some cases cybernetics are very common, If not standard equipment for most of the denizens of Shadowrun this option was out.

The second issue was that the majority of cybernetics in Shadowrun are very reliable. Thus again unlike artifacts I would need to avoid depletion. So I set about making “cyberwear” pricing out a cost so that they could be purchased like any other equipment. The goal being some cybernetics were fairly cheep and easy to come by. Allowing for a large part of the setting to have some limited commonplace cyber gear.

The Last hurdle was the humanity, Gutterwear and Alphawear. Humanity and essence in Shadowrun are your built-in limits how much cybernetics your body can handle. In Shadowrun if you are not careful you can reach a point with implants where you begin to lose yourself. You begin to become too machine, this is tracked by humanity loss.

The following is what I came up with. There are three levels of cyberwear. Simple, Average and Major. Taking from the cypher limit concept I decided to limit the number of implants and enhancement’s a player could have. Thus mimicking essence and humanity of Shadowrun games that have used Cybernetics in the past.

To represent Gutterwear and Alphawear it turned out to be a very simple fix. If a player wishes Alphawear gear they must pay the next step up in cost for the item. This treats the cybernetic as half of the cost towards their cybernetics limit. If they purchased Gutterwear they may cut the cost of the cybernetic by one level but the item now has a Depletion of 1 in 20. Any Depleted cybernetics must be repaired before they can be used again. Repair Tasks are based on the level of the cybernetic. Simple=3 Average=5 Major=7 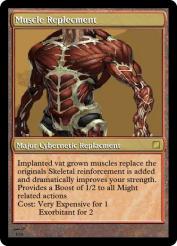 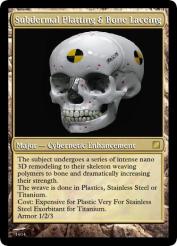 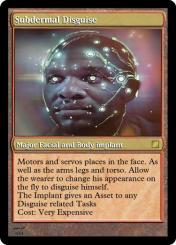 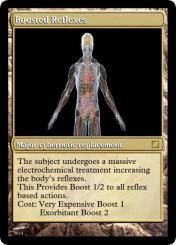 With these three types of Cybernetics groups it lays the groundwork for creating as many more cybernetics as the players and GM can imagine. With this simple system I can move on to other setting elements that will help bring the feel of the game alive. From here I went on to make a handful of cyber gear that fit the setting. Enjoy!