For today’s post, I decided to use an already created race that fits perfectly in my world. They didn’t naturally evolve on Aquatica but were forcibly evolved by the Atlantean biomancers (probably from a froglike progenitor).

Did you ever see a race in a science fiction or fantasy film that you wanted to play, but never had the stats for? Did you ever want to see your favorite film species in your game of Pathfinder?

Well look no further, today, I give you a new race from the Star Wars Saga, best explained by the following quote:

That’s right, the Gungans are here!

Gungans are an amphibious sentient species and native to various swamps. The various different Gungan races can live on both water and land, but often make their home in underwater cities, that awe those coming from the outside. Physically, Gungans were tall humanoids with a flexible structure, strong leg muscles, strong bills, muscular tongues, and many other traits designed for living in watery environments.

The Gungans have a tense and uneasy relationship with the other humanoid species, especially humans, as they have been at war with them in the past. Now, they have an envoy by the name of Binks serving at an embassy in a nearby human kingdom.

Gungans are a sentient amphibious species, though some would dispute this claim after having met Envoy Binks. Some, in fact, claim that he was sent to allay suspicion and that he’s part of a clever cover-up designed to make humans underestimate the Gungans. Generally, both subspecies are tall humanoids with a flexible structure and strong leg muscles allowing them to become the predominant underwater species in the areas where they choose to live.

There are two Gungan races: the lanky Otolla, who sport prominent bills and eyes set on short stalks, and the heavier Ankura, whose eyes are hooded. The Gungan earlobes, called haillu, were most prominent in the Otolla. These earlobes displayed their emotions.

Below you’ll find the rules for adding these races to your game, as well as the rules for their racial mount, the Kaadu. Please note that both types of Gungans come up to 11 Racial Points (RP) as per the guide in the Advanced Player’s Guide, meaning that they are on roughly the same power level as the races presented in the Core Rulebook.

END_OF_DOCUMENT_TOKEN_TO_BE_REPLACED

When your weekly tabletop RPG is wrapping up and you have a week or two until your next game session. When does your game prep start? END_OF_DOCUMENT_TOKEN_TO_BE_REPLACED

My favorite RPG that I never get to play is BESM: I have a copy of Big Ears, Small Mouse that I’ve played twice. It is a supplement to BESM, but uses animal and insect PCs and NPCs. I was a grasshopper mouse barbarian and my son was a dragonfly rogue, my husband ran it in a Redwall-like world. It was a fun game. He … END_OF_DOCUMENT_TOKEN_TO_BE_REPLACED

The Most Intellectual RPG Owned The most intellectual RPG I own is Chivalry and Sorcery, but I haven’t played it. Everyone else say that its too complicated, similar to Central Casting . It was mostly bought for the tables, and has great city creation rules although it’s very rule-heavy. Related Links: RPGaDay: Favorite Tie-In Novel/Game RPGaDay: Coolest RPG product/book END_OF_DOCUMENT_TOKEN_TO_BE_REPLACED

Favorite Dice/Dice Set I had a multi-colored set of d6s that were specifically used for rolling character stats. They rolled great. One day I was making some Rifts NPCs for my husband and kept rolling over 20 (if you roll a 6 you keep rolling until you stop rolling 6). He banned me from rolling them again because I made some characters with almost superhuman … END_OF_DOCUMENT_TOKEN_TO_BE_REPLACED

My favorite character My favorite character is the original playtest version of my Badgen race, his name was Stonefist. He was a barbarian, fighter. We did eventually have to tone him down, as he was unbalanced. I made him by the savage species rules and even gave him less than the rules allowed. He started out in 3.0, upgraded him to 3.5 and then Pathfinder. … END_OF_DOCUMENT_TOKEN_TO_BE_REPLACED 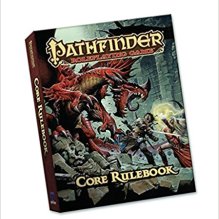 Favorite Game System My favorite game system currently is Pathfinder. I like the customization that is available. Especially, the character and race building rules. Although, if I could find a group I would love to play old school BESM 2nd Edition. It is simple and fun to play but I would use the new rules of high rolls are best, not low. Related Links: RPGaDay: … END_OF_DOCUMENT_TOKEN_TO_BE_REPLACED