My homebrew world has been around the block for awhile now. It has gone through some changes over the years but the one thing that has always remained the same in my world is the majority of my Pantheon. Four gods stand apart from the rest in my setting and they are they Dragon Gods.

If you have given my world creation myth a look you will know that my world is heavily inspired by Dragons. The world was created by a Dragon God who created it from the elemental lords that he defeated. My map of the world is the corpse of that same Dragon god.

For a long time, my world only had one Overgod. Eventually by way of trickery and with the assistance of a fragmented essence of the Dragons divinity. Humanity rose up and slew the Great Dragon Overgod. This event would be forever known as “The Sundering”. All who took part attained a piece of divinity and became the gods of my world. But they did not take all of the Great Dragons power. In the moments before his end, he split his essence into several pieces. Thus creating the four dragon gods. Each of these gods became the draconic embodiment of seasons in my world.

The first of the Dragon Gods I am pleased to share with you is Winter. For one reason or another, she gets a lot of play at my tables of the years. With only the Dragon of Spring likely seeing more players who have followed one of my Dragon gods. I think part of her draw is she is a god of death but is against the creation or existence of undead.

I used Natural Crit Homebrewery to make the page. 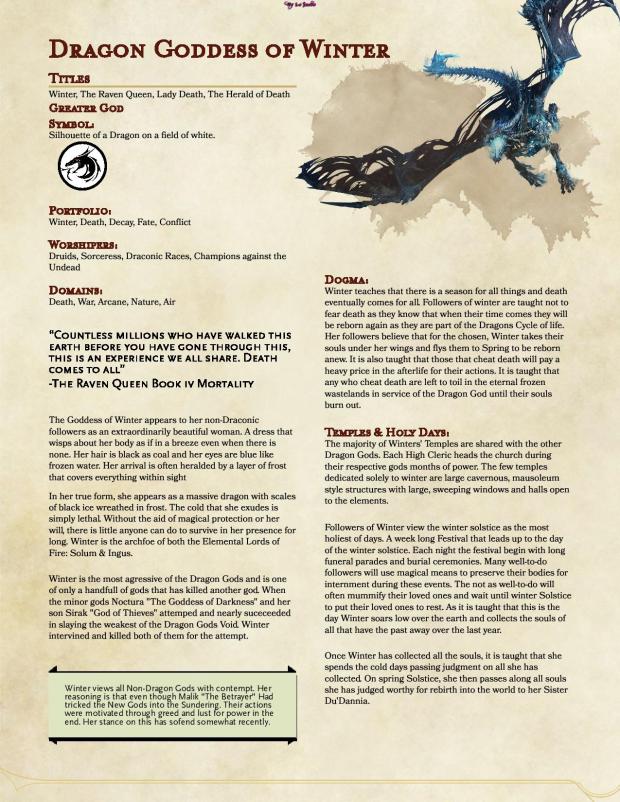 Recently I picked up the Rise of Tiamat 5E Campaign and it inspired me to use it in my homebrew. Wanting Tiamat to be a false representation of my Dragons of the seasons. I introduced a new Dragon God. Giving me five Dragons and one for Tiamat to Masquerade as while she grew in power in her attempt to enter into this new world.