I have experience with each of these and like them all for several reasons. So I think that I will touch on my thoughts on all of them. So let’s have at the First RPGaDay question!

Real Dice, Dice App, Diceless how do you prefer to roll?

So First up, my thoughts about real dice. There is just something about the heft and feel of dice and the sound of hearing them clatter along the table that really gets me going as a gamer. Board games, Card Games, Wargames & RPG’s dice are everywhere and much like Pokemon if you love dice as much as I do you got to catch them all!

For the longest time, I had a bad habit. I would go into my FLGS and if there was not a product on the shelf that I wanted I would pick up a set of dice. It was my little way of feeding the beast as well as supporting my store. For years if I had a new gamer join my table I would allow them to pick their own SET of dice from my HUGE collection. This stopped after a few years when I realized that if I did not curb this addiction I was going to need an oil drum to store my dice. These days I still collect dice. But I have become more eccentric in my selections. I search out dice that others will go wow.. those are cool. Often to the fact that is also followed up with. I don’t know if I would spend that much on dice man. But that’s okay! I love showing off I am a gamer. I have several Dog Might Games products, So If I am going to have a high-end wooden box of awesome I don’t want to have a “regular” old set of polys in that box.

These days I still collect dice. But I have become more eccentric in my selections. I search out dice will evoke the utterance of “WOW.. those are cool!”  I love showing off I am a gamer. I have several Dog Might Games products, So If I am going to have a high-end wooden box of awesome, I don’t want to have a “regular” old set of polys in that box. 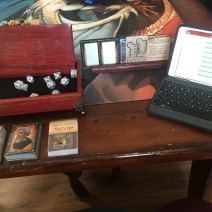 Dice Apps
If I had this question to answer three of four years ago, I would say I am not a fan. Since then, Dice Apps have come a long way. I have seen them go from not being allowed at any of the tables I paly in, to now being used extensively in some games. Right now in my very own Friday night RPG game of Star Wars Edge of the Empire. Five of my six players use the dice app! This is partly due to several of the features that the App offers. But the main reason is because the App is far cheaper than the dice set for the game. Most of my players are of the opinion that they do not want to spend 15 bucks on Dice that are only usable for one system. When you can opt to buy the Dice App for only 5 dollars. This has caused my table to opt for Digital dice at my Friday game. In this case, I would never insist that my players purchase the physical dice for the table. And with the FFG dice app you get even more than the SWEOE Dice. The App gives you Star Wars: Rebellion Dice, Imperial Assult Dice,Star Wars Armada Dice, SWRPG Dice, X-wing Dice & a set of Standard d4-20 dice.

I also think that with the Growing trend of Boardgames Apps that gamers, in general, are becoming more comfortable as a whole with Dice Apps.

Diceless
When you say “Diceless,” I think most people jump straight to diceless systems like Amber, or Minds Eye Theater. But for me when I think of Diceless games I still think of D&D. I recall hours and hours of Diceless D&D as a kid growing up. It was not that we did not have dice. But rather haveing Dice was just simply inconvenient.

We were kids! I was a young teen when I started playing RPG’s seriously. Granted I started running games at 9. But by the time I was 12, my friends and I were playing D&D daily… HOURLY.. CONSTANTLY!
Yet unlike the Cliche of old we were not chained to tables in the basement. Instead, we were fishing and riding bikes and building tree forts. All the while we were still locked in our fantasy worlds gaming the entire time. To have carried dice along and try and find someplace flat to roll them would have just slowed us down!  Have you ever tried to roll a D20 in a pool? Trust me we had plenty of combats while cooling off in the pool or lake.

I had several diceless options or “Tricks”up my sleeve. Everything form  Paper Rock Scissors.” to pick a number 1-10 and I would show another player behind my back the number. I even used Scrabble tokens numbered 1-10 in my pocket. I would tell a player to call out a target number. If you picked the number I drew you crit. If you were within 1  you hit plate mail , 2 chainmail, 3 everything else.  I would keep a tiny notebook and tear off pieces of a page to represent damage. When it was gone the creature was defeated. I just wish I could have recorded the fantastical stories we had again! Later when I joined the service we pulled numbers from a hat or carved dice from soap. Or we went back to my early years. Deployment never stopped us from gaming.

I would like to note an Amazing diceless game that deserves a boost as well. Fate of the Norns is a Viking RPG where the players cast Runes instead of rolling dice. It’s also beautiful !

Personally, I like them all. I love the look the feel and the sound of Real Dice. With so many awesome Apps out there I can go to a game as a GM or a Player these days with Just a Smart Phone and run an awesome game! And I will alway’s love a well come Diceless system. That said what dice do I like best?