Here we are again with another great Kickstarter by Dog Might Games underway. The Viking’s artisans from the north are at it again with their newest creation “The Component Collector”. SO what is this crazy stack of wood and magnets with a strap that at first glance looks like Dog Might Games made an all wood drink coaster set? In the words of the Dog Might Team, The Component Collector is

“A modular tile system for organizing board game tokens and components. Use with your entire game library. Custom. Magnetic. Elegant.” 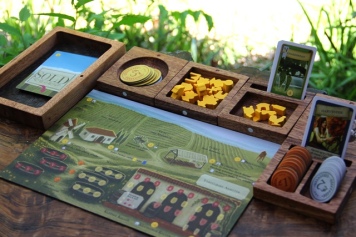 Having just wrapped up the review for the Skirmish Box I was only slightly surprised when I was contacted about doing another review so soon. The creative guys at Dog Might have been cranking out a ton of awesome things in the last few months. If you do not follow the Dog Might Games Feeds you may be surprised to know that not all things Dog Might are launched as Kickstarters.

So, Michael Konas informed me that they had packed up a new prototype that they were about to launch on Kickstarter and had sent me one for review. It arrived the day before launch and in the time I have had it the Kickstarter has exploded. At the time of this writing, there is still 22 days to go on the project and it has pulled in more than $84 thousand dollars!

Often when I get a Dog Might Games product I take advantage of my local games and take it around to FLGS to get a wider opinion on the project than just my own. It’s always nice to see the reactions of fellow gamers when they have a quality product in hand and they can think about how they would use it at the table. More often than not their thoughts are very much in line with my own. The craftsmanship is beautiful, the feel is solid in the hand and they look amazing on the table. After that, it is just a matter of deciding how useful it is at the table for its intended purpose.

Honestly, when I first saw the pictures of The Component Collector I was not sure what to think of it. It was definitely something that I knew I was going to need to get my hands on and experiment with. This might be because I can get a little OCD. This left me at first not fully seeing the wide variety of uses that you got from having 8 trays. The main issue I was having difficulty with was understanding that you would not always use all 8 trays. The moment I accepted that the intent that The Component Collector having 8 trays was to give you the widest range of games you could use it with, it all became clear.

When my Component Collector arrived I happened to be running D&D. So, I wasted no time in pausing the game long enough to rip the box open and begin using it. Once I got The Component Collector on the table its design became immediately apparent. The many numerous options of how you can configure the layout of the trays is just awesome! 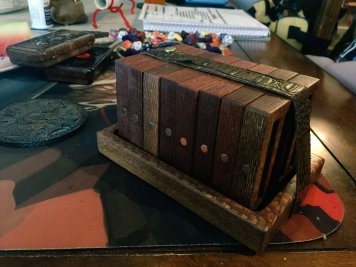 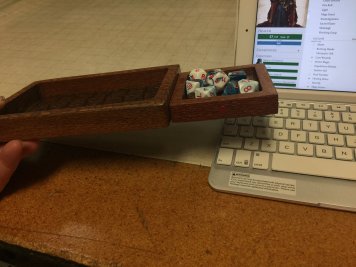 As The Component Collector made its way around the table my players each spent a little hands-on quality time with the prototype. Playing with their own configurations and getting an idea of how they could put it to use. The first thing I noticed as it was being passed around was everyone had would assemble in a way that would suit them best. Now, granted there is no wrong way to set it up. But that also is the beauty of The Component Collector.

When I took it to my FLGS the board game crowd was eager to get their hands on The Component Collector. The first thing I noticed as it was making its way around the room was much the same behavior as my RPG players. One by one each person laid the tiles out and began clicking them together the way it felt natural to them. Some made one long single row while others made two rows. Some boxed the dice tray in with tiles while others set the dice tray aside altogether. With no wrong way (as long as the dot faces away from you) to use the tiles, your personal creativity takes over. Sometimes in unexpected ways as one of the players made a Shelf to hold cards at one point.

Over the course of my week with the product, I have taken it with me to my FLGS twice. Having shown it off to more than a dozen gamers who I have let experiment with it. Some big fans of Dog Might Games some not so much. One who at the mention of Dog Might Games commented “Oh the guys that make wooden boxes?” Yet every single person I have shown this magnetic tile system to has liked it. That my friends is high praise from a guy that thinks of you as “The guys that make wood boxes.”

The feedback that I gathered from those who handled the product over the week was overwhelmingly positive. Now, It must be said that my set is a prototype and is not the final design that every one may receive. The Square tile was by far the most popular tile with the Bowl, Card, and Double seeming to be the other favorites. This could easily have been due to the games that were played as noted above you likely will not find yourself using all 8 trays at a time. This proved to be true as well when out in the wild. Players often only used 6 tiles at a time. Myself I used two when playing my Sunday RPG the Square and the dice tray. The Bowl for as popular as it was, did receive a few comments wishing it was a little wider or deeper. Allowing for it to hold a larger number of tokens or meeples. I have already passed this information onto Dog Might Games and they have said they will see if they are able to accommodate that request.

My final thoughts on the Component Collector

This dice tray with 8 tiles slowly crept its way into my heart. I went from on the fence to in love with it. Anyone would be hard pressed not to be able to find a use for several of these trays for most games. With the option for just few bucks more, you have the ability to hand-pick all 8+ tiles. Unlocking full customization to you and opening a vast number of additional game options. Congratulations Dog Might Games you have Critical Hit on your hands!

This project just might be a perfect example of what Dog Might Games is all about. With every project, they strive to give their customers choices, hundreds of thousands of choices! If you back a Dog Might product you know you are going to get something personal, special, and maybe even unique among the rest. A perfect example of this is my Skirmish box. I got the most basic of boxes but with my custom logo, I know that no one except myself has that box. They may have a skirmish box but this one is mine and mine alone. In this day and age of mass produced things, this is exceptional and exceptional is the standard at Dog Might Games. 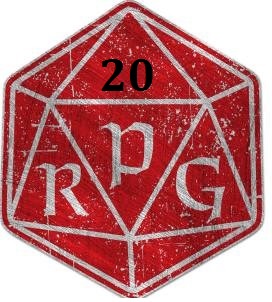