This week was a slow week gaming wise. Normally there would have been a truckload of gaming going on but unlike normal many of our game’s this week did not make.

Friday I called my Edge of the Empire game. I needed a good break with so much Real Life things going on I just needed to take a session to recover.

Saturday was scheduled to be our D&D 5E out of the Abyss game. This game also dropped and did not make do with real life reasons as well. Our GM needed a personal day much like I did on Friday.

My Sunday game did make, Iron kingdoms RPG. In this game, I am playing Tovivar Anvilbock. He is a Dwarf Arcane Mechanic, Feild Mechanic with a light labor jack. This game was my introduction to the group and I spent most of my time tweaking and making final adjustments to my character before my introduction. Not much to rely on this session other than I am chomping at the bit to get back to it in two weeks!

One new piece of gaming news for me and my group. I am now the proud owner of a 3D printer. I have been feeling out the printer and already have had some great 3D print runs. There have been an error or two but thus far I am exceptionally happy with the printer.

I have had the chance to print out a few cool pieces that I will share with you here. I likely will do a longer blog about the 3D printer in the coming days. 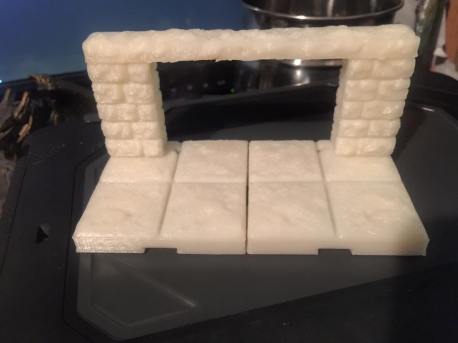