Monte Cook and friends are back again with another new and awesome Kickstarter. Into the Ninth World. Venture Farther. Go Deeper. Go Beyond. For the first time we will now have the ability to explore more than the ninth world. With each of these books weighing in at 160 page hard covers there is a ton of content coming down range for Numenera players. 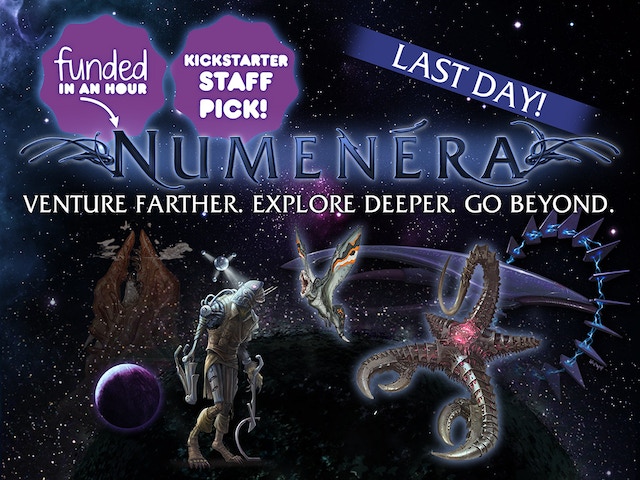 This Kick will be for at least a three book set release. Into the Outside. Into the Deep. Into the Night.

Into the Night: This 160-page hardcover takes Numenera players and GMs beyond the grip of Earth’s gravity, to locations pioneered by the previous worlds on the moon, elsewhere in the solar system, and in remote reaches of the galaxy. Into the Night releases in late September. It’s already written and in editing, and it does not rely on the success of this Kickstarter to be released—although we do hope this campaign will allow some cool upgrades to the book through stretch goals.

Into the Deep: Delve into the depths of the Ninth World’s oceans in this 160-page hardcover book. The prior worlds extended their empires into the seas—as previously touched on in the Numenera corebook and The Devil’s Spine—and the wonders to be found there are every bit as glorious, mysterious, exciting, and just plain weird as the landbound realms of the Ninth World.Into the Deep will release in the spring of 2016.

Into the Outside: It’s well known that the denizens of the prior worlds bent time and space to their liking, creating links to realms outside the normal world. This 160-page hardcover book takes us into these other worlds, exploring pocket dimensions, the realms of ultraterrestrials, and parallel universes. Into the Outside will ship in the autumn of 2016.

Numenera Artifact Deck:Experienced Numenera GMs agree that our decks (such as the Creature Deck and Cypher Deck) are great for inspiration, and huge time-savers in game prep and during play. We’re going to add an Artifact Deck full of all-new content to help you generate artifacts quickly and easily while getting ready for your game, or when you need one at the gaming table.

Numenera is a wonderful setting and to see the world get a revisit fresh off the launch of the Cypher System is wonderful. So many other game companies just keep moving from setting to setting and forget where they started along the way.

As of the writing of this blog the project is less than an hour old and already funded. It will be fun to see how many Stretch Goals this one offers up.