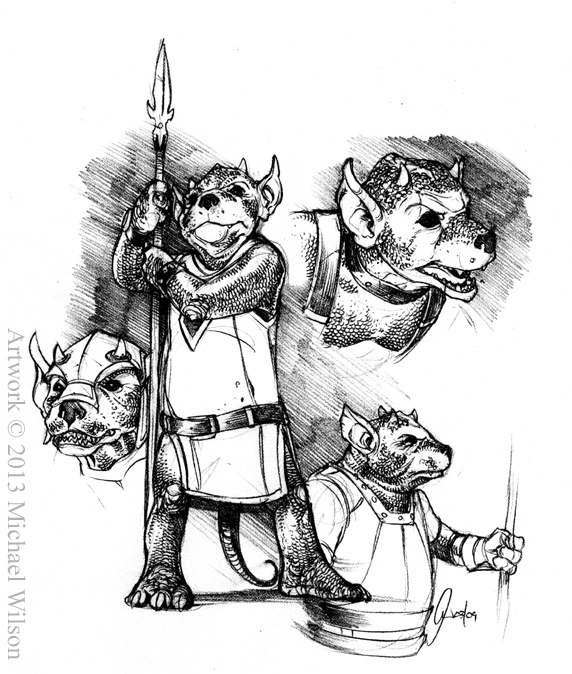 With D&D’s 40th here it takes my thoughts back to when I first began the game. The creatures I encountered, the wonder I thrilled in as I explored deep dark dungeons and encountered terrible monsters. But few did I ever come to love and respect as much as the Kobolds !

I cut my teeth as an adventure in a module I love to this day B2 Keep on the Borderlands! I had bravely fought Goblins and survived. Thinking myself ready for anything we crept forward. And my world was forever changed by the Kobold.

Baskets of scorpions while being stabbed at with long spears while stuck at the bottom of a ten foot pit. This is when I learned not everything in the world of Dungeons and Dragons was most definitely to be judged by its size. My PC did not survive that day and  I thank the cruel and vicious beast from that day. From then on I was hooked with RPGs.

With that short trip down memory lane, I will open with my new Category: Creature Features.  What you will find with Creature Features is a bit of background related to the Beast and a suggested fun encounter or great tactics that I may or may not have used in games against my hapless fellow players.

So without further ado; the Kobold.
With Kobolds its all about two factors. Numbers and tactics. These are not warriors that are going to face you on the open field of battle. They are D&D original guerrilla warfare experts ! Use them right and your players will not only respect them but fear them. But thats okay they wont know you’re using them because they won’t see them coming until too late.
Kobolds are short reptilian humanoids standing in at a whopping 30-40 pounds and 3-4 foot of height.. But it’s not the size that makes these little buggers deadly. Its their skills, numbers and their fondness of tricks and traps.