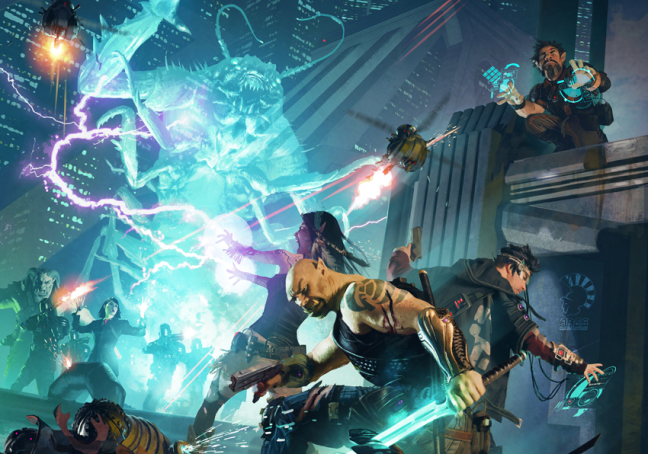 So here we are again readers Totems, Fetishes and Talismans! The long-awaited adaptation of Shadowrun inspired Foci Magic in the Cypher system. Long awaited, so long awaited one of my awesome gamers took up the task of tackling most of the work. He took the foundations built on the new version of cybernetics found Here and built a solid set of options for magic items in Cypherrun.  So if you like the following be sure to give my good friend Nick (@Negeta76 over on Twitter) a thank you because if it was not for him we likely would be just starting not finishing this blog. So, let’s take a deeper look at what Shadowrun style magic in the Cypher System.

It should be noted that in Shadowrun magical gear is called “foci”. With the term “Focus” existing as a keyword in the Cypher System, it is important to separate the two so that we can minimize any confusion. So in the Cypher System, Shadowrun Foci are classified as “Magical Gear” and further divided into three groups. These Groups are.

For balance with cybernetics, it was determined that only characters who have taken Adept or the Magic Flavor are able to unlock the magical potential of these items. Additionally, to keep the balance both ways in Cypher Shadowrun the same item limits apply to Magic as they do Cybernetics.

One difference between magic items and cybernetics is that a player must bind themselves to their magic item. Given time a player can shift their bond to other magic items that they own or find, but this takes time and they must adhere to the Item limit rules for bonded items detailed below.

Further, if you are playing a concept that might have both magic and cybernetics the only requirement that you must meet is adhering to the Type or Flavor of Adept or Magic. The mixing of magic and cybernetics is a costly one in Shadowrun. Installing cybernetics costs Essence in Shadowrun. To represent this in Cypher System if you meet the requirements to access magic items and chose to install cybernetics. You lose access PERMANENTLY to whatever analogous slot that you have taken. Make these choices with the knowledge that there is no going back.

To be clear Magic Item Slots lost due to Essence loss can NEVER be restored.

Also, the power that a player gains through Magic Items has diminishing returns. The more often a player attempts to call on their power over the course of a day the more difficult the check becomes.

Fetishes, Talismans, and Totmes much like artifacts and Cyphers each have an Item Level. In the case of Magic Items, the level of an item is tied directly to the power level of the summoned spirit or Tier associated with the ability the Item is mimicking. This was done for balancing factors and if wanted to play a high power game from the jump. You could forgo this. But I think in the interests of game balance this is a good rule of thumb.

Magic Items of Higher Tier than the Player cannot be bound with until they reach the same Tier as the item.

to activate the power of the Magic Item or gain control over the Summoned Spirit. When a spirit is summoned the spirits appear in at an immediate distance to the item they are bonded with and may act immediately. The Spirit will behave as instructed by the player who is bound to the magic item as long as the character succeeds in their control check.  Once Summoned and Controlled the spirits will remain until Dismissed or Destroyed.

Nick chooses to summon a Level 2 Earth Spirit. The check needed to summon and control the Earth spirit is a Rank 2 check. On the third round of combat, the Spirit is destroyed. With combat still going Nick chooses to resummon the spirt. The difficulty increases by 2 requiring a Level 4 check to summon and control the Earth Spirit again. When the combat ends Nick can choose to dismiss the spirit or retain control until the end of the scene.

If Nick decides later in the adventure so summon the Earth Spirit yet again this check would now be a Level 6 Control Check.

In this same example if Nick was summoning a Level 6 Fetish Spirit the check after the above example would be a 10.
Level 6 CC to activate + 2 to resummon in combat, Lastly an additional +2 if he decided to summon it later in the adventure.

If a Spirit is Dismissed it returns to its plane of existence until called again. Likewise, if the Spirit is destroyed it is only its Material body that is lost and can be resummoned. At the end of a Scene if the Spirit has not been dismissed or destroyed the player. They may choose to attempt another Control Check to force the Spirit to remain for an additional scene.

If a player makes a control check and the result is a fail, the summon breaks free.  A free summon has the preference to attack those that have damaged it or the conjurer that failed to control it.

Additionally, if you wanted as a possible GM intrusion on a rolling a 1. The summoned creature only goes for the conjurer that failed to control it, ignoring others that attack it. At any point before the control check, the summoner can choose to release the creature. Released creatures will simply disappear before it takes its turn.

Magic Items alow Adepts and Magic flavor players a bit of versatility similar to the “Casts Spells” focus. Players may unlock the powers and abilities contained in a Magic Item. They take the time to Bond with the Magic Item and are of the appropriate Tier. The length of time required to bond with an item varies. Players must also be of the of the same or higher Tier of the item to bond successfully.

Time Needed to Establish the Bond:

Fetishes:  These magic items can be bound within just 10 min.

Totems: These powerful magic item can only be rebound to a character once every 10 hours.

SPECIAL: A player may force the bonding with a Magic Item at the cost of 1Exp. Spirts will NEVER like this and it will prompt an immediate Control Check.

Now with the basics laid out next blog will give you some sample Magic Items. I hope you all find this useful. Comment below and let me know what you think