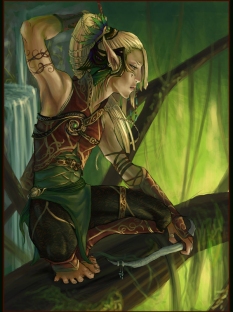 Racial Feats
The following feats are available to a wild elf character who meets the prerequisites.

Wild elves are rarely seen by others, because they live in the heart of thick forests and have incredible skill at keeping hidden. Their skin tends to be dark brown, and their hair ranges from black to light brown, lightening to silvery white with age. Wild elves are a very reclusive race and prefer to be with their own kind in the deep forests.
They often cover their skin in tattoos or ritual scaring. Their housing, clothing, weapons and equipment look primitive but are well-made.