I am back again with a review of FAITH – A Garden In Hell. In June last year, I reviewed FAITH RPG and gave it a very positive Ranking of 17. Since then, they went on to run and deliver another Kickstarter: FAITH – A Garden In Hell. I did not pick this one up, as I am not normally one to grab up campaign box sets. With Burning Games preparing to launch their newest Kickstarter for FAITH, (deleted something here) they reached out to me once more. They asked if I would be interested in taking a look at where the story of FAITH has gone. As well as write a follow-up review before the launch of their Core Book Kickstarter. As you can see I accepted. So let’s get to it, shall we?

Following in the footsteps of the FAITH RPG project, the first thing that you notice with A Garden in Hell is they pick up right where they left off, with beautiful art. The cover of the campaign box is striking, vividly bringing to life the image of the alien world the story will take place in.

A Garden In Hell comes with

FAITH A Garden In Hell not only designed to drop you into the thick of things as a story, but also walk you through learning how to play & run a game of FAITH. You also receive the tools you need to continue running future games of FAITH. 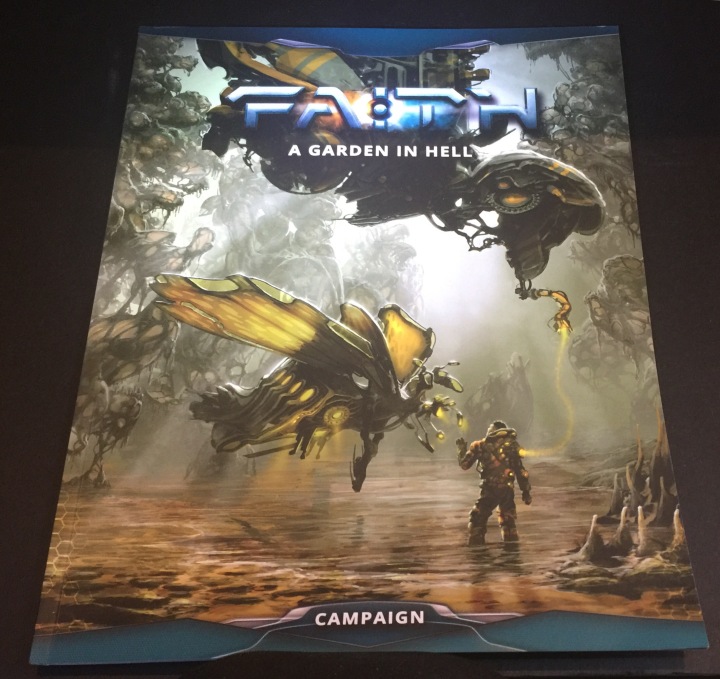 The 76-page campaign book brings you the GM up to speed with the setting of FAITH, introducing you to the Corvo and the Iz’Kal and the coalition they have formed to push back against the Ravagers. Also introduced the players as Team Inferi, the surviving members of a coalition recon squad crash landed on a strange alien world inhabited by a Ravager queen & cut off from their allies.

The encounters are designed with the understanding that this is likely the first time the Gamemaster has run FAITH. There is plenty of explanation for both the Gamemaster and the players. The first encounter is a gameplay walkthrough to help get the game flowing properly for everyone. Thus, A Garden In Hell serves both as the first Campaign book and a quick start guide for everyone involved. However, instead of just a small taste like many quick start guides, A Garden in Hell is a full 21 chapter 4 act campaign that should take most groups between 7-12 sessions to finish!  Act One focuses on exploration and recon. Act Two features diplomacy and combat. Act Three deals with backstory & furthering the plot. Act Four has a climactic face-off that has multiple endings, one of which will become canon for the FAITH RPG.

The writing is excellent; the opening alone sets a vivid scene that strikes a tone for the whole story. The campaign book presents each encounter in the traditional fashion of “Read this section aloud” in one colored block and the Gamemasters section is not in the highlighted portions. One thing that I noticed right away was the encounter creation portion, and I loved this. For example, in one of the encounters in the Gamemasters section where a combat is going to take place it says:

Create a level 3 encounter using a combination of the following NPC’s Stormer,Flamer,Reaper,Techno & Ironskin.

This subtle level of flexibility might not be noticed by most, but to me, this is something I truly appreciate. It frames me out an encounter and still gives me some flexibility. I thank the minds behind Burning Games for that. 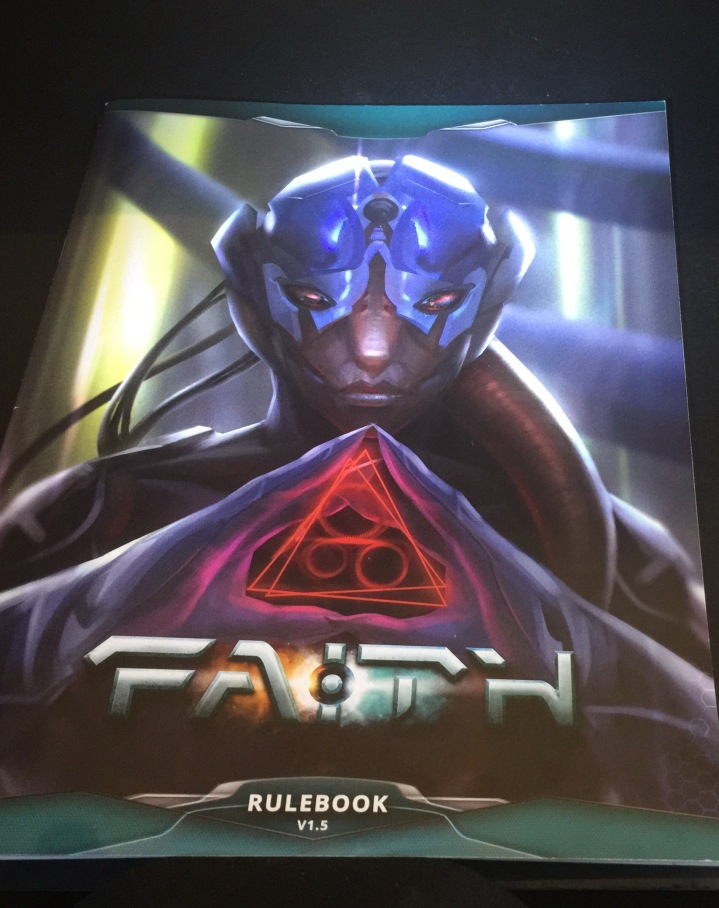 The rulebook is exactly the same as the free download found on the Burning Games website. It is 38 pages, 39 if you count the printable character sheet, the index, and the quick character creation rules. It is also the 1.5 version of the rules, taking all of the feedback from their players and playtests into account. Yes, you may already have this in PDF form, but many of you purists out there will be happy to have a physical copy in hand.

The rulebook, for the most part, is very cut and dry. Rules are explained well and have plenty of easy to understand examples that anyone should be able to quickly grasp. The only ‘downside’ of the rulebook is the artwork. There is so much beautiful art in FAITH I and my players that flipped through the rulebook found we actually wanted MORE! More visuals to bring the world of FAITH to life for us like the cards and things.

NOTE: I can confirm this as I have been given the honor to take a peek between the covers of the upcoming FAITH Core Book. ( Don’t tell Burning games I told you )

Each character folio is packed with info. One page is background and personality information, followed by racial ability & upgrades. The third gives you information about your God and the gifts from them, and finally the character sheet itself. Not much here to talk about, but it’s nice having some Pre-Gens for an introduction to the game. 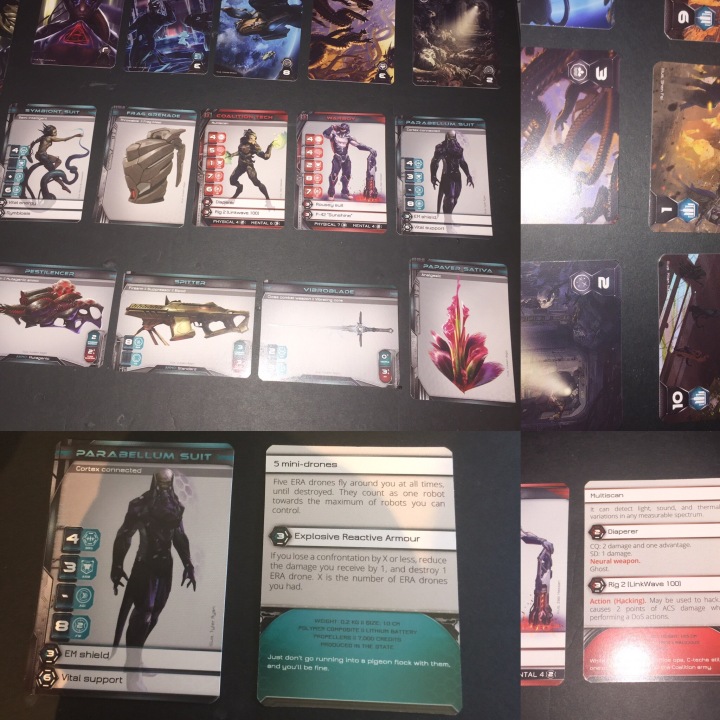 This is the where FAITH takes moves apart from standard RPGS. FAITH uses a poker style draw system for all skill and combat resolutions, referred to as Confrontations. In FAITH if the only time you can fail doing something is if it is a Confrontation. It firmly embraces the YES,and… RPG mentality. The poker style playing of cards during confrontations allows you the player to manage your own luck and decided when you want to “Roll” high on an action. Not a random roll of the dice. 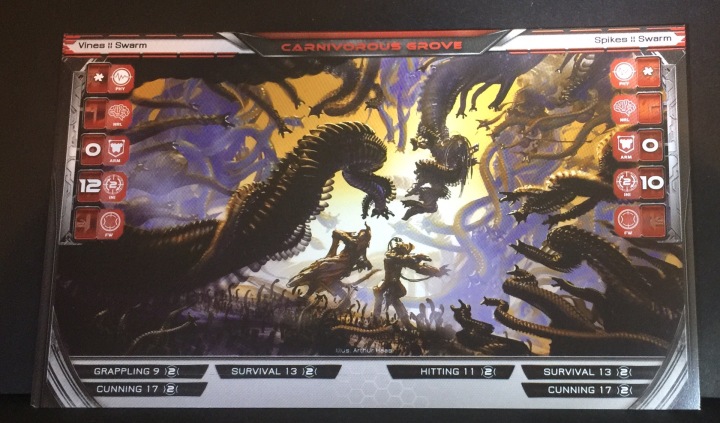 FAITH is very much a game of visuals, with cards for gear laid out and Character Boards (if you have them). Keeping with that theme, the GM gets several large boss cards for major encounters. The artwork alone is worth it to show the players what they are up against. 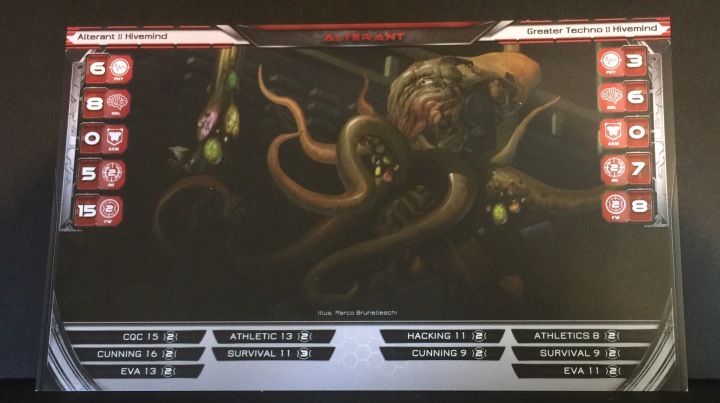 Recently have become a huge campaign flowchart fan. The outline for A Garden in Hell is simple and I flipping love it! Not only does the provided  4 sheet outline provide you with a simple handy guide from ACT to ACT and the scenes in each ACT.  They also provide you with a sample key to keep track of if the players achieved the goal or failed a task in each scene! I can not say enough how I hope other RPG games will see this and follow similar outlines.

This is a stand out box set. Not only is it an introduction to the FAITH system, it gives you the entire current ruleset in print format. You get 7-12 sessions worth of game content and a wonderful outline as a guide for running the campaign. I think it is a great box set. In my past review, I gave FAIT RPG a 17. This firmly convinces me that I gave it the right ranking. Likely with a successful Kickstarter, I can only see the score going up for Burning Games. I look forward to being able to bring you a deeper look at FAITH CORE