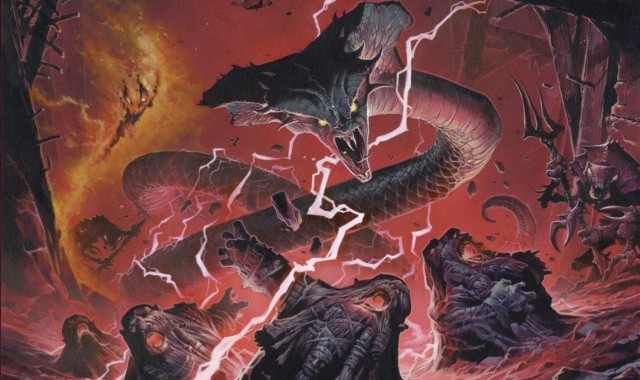 Delve long enough and deep enough and you might run into these ancient  creatures. The Naga are immensely powerful immortal beings. Each encounter with a Naga can prove difficult as it is likely to be much different then the last Naga. As they are also very intelligent and they ability’s vary widely as does their alignments.
Naga were created to guard places of power or powerful magical devices. As immortal beings, adventures seeking these bits of knowledge or items of power will prove difficult to obtain.  As a Naga are innate spell casters and will have had several lifetimes of most of the adventuring group to prepare for any encounter.
This said it would also hold that as an intelligent creature a Naga might have amassed a collection of treasure and other magical items of its own in carrying out its duty. Collected from the fallen that have come in search of it before. With that in mind it is easy to imagine a Naga having any number of scrolls and rings or wands and maybe even a staff near by that it could put to  use to aid it in its assigned task.
Additional as Immortal beings Naga outlived their creators. And many no longer guard knowledge or treasure for their long dead masters but hoard it for themselves. Some even venture out and lay claim to regions and all that live under their protection.
This in itself can prove difficult when dealing with Naga that have claimed territory as again Naga come in any disposition and alignment. This often proves hard for Humanoids to grasp as their monstrous appearance.

With a shorter post I figured I would throw up a fun little sample encounter with a Naga. Bound to watch over this treasure for countless years. This small location could be stuck in any existing Dungeon or anywhere you like.
Maybe the party needs to get the blue gem in the room on the right of the map.. Or maybe some mystical ritual must be conducted on the altar of flame for the spell to work. Come up with your own cool catch. The Naga lurks close by or in the shadows. Maybe even invisible. Waiting for the right time to strike. But only when the moment best suits the Naga’s advantage.
If you were to give out treasure for this encounter be sure it is loot your Naga could use in the encounter. Naga are smart enough not to let good loot go to waste.
If you would rather see the encounter Role Played out. Maybe have the party bring the Naga a Magic item of value to trade for the item. After all his Masters probably perished long ago. Or maybe the Naga would be willing to let the party take the item and free it of guardianship of the treasure so that it may go freely about its own tasks. Lastly maybe it will wish to test the party. After all it might be a good aligned Naga and has been keeping the item from the hands of evil all this time and just wishes for the players to prove themselves worthy.