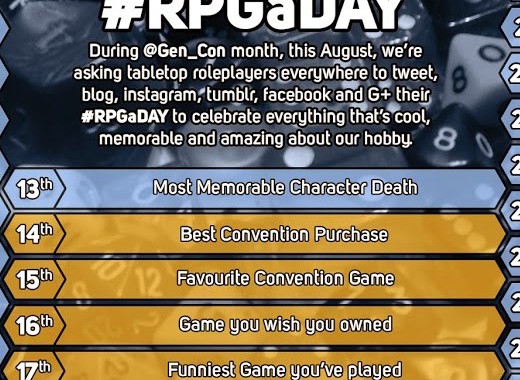 Now freshly caught up to Day 11 we well I move on to Weirdest RPG owned. This one took some thought.. I Want to give a nod to the game that I wish was the weirdest RPG game I own but I no longer have a copy of HOL Human Occupied Landfill. But I will give the nod instead to to far more classic and weird fun game.  Paranoia.. a game were the goal is for the players to be the last one left alive when the smoke clears all the while trying to root out the evil commie traitors for the GM .. I mean computer. Why you ask ? Well the computer is your friend, Trust the computer. The computer is crazy ! Keep your laser handy….
This game was so deadly and crazy with so many easy ways to die that each player in the game starts game with a “Six Pack” of clones so that you don’t miss to much fun between deaths in the game. Yeah It was that easy to get offed in Paranoia.. walk over a line Not in your Security clearance.. “Please report to the nearest termination chamber…” No do as the GM …Er Computer asked of you.. Please report to the nearest termination chamber. Allow one of the players to see you have a mutant super power.. and get shot for being a Mutant commie Traitor. Refuse/Fail to report to the nearest termination chamber .. Now your a Commie Traitor and if your party do not kill you so are they..
Honestly it is insane crazy fun .. And if you don’t like it the computer will kill you. Because the computer is crazy. And if that was not enough Paranoia threw in that the players were also each members of Secret societies. Societies like “The Knights of the circular Object” or The Trekkie & the church of the Christ computer programmer.. By the way Secret Societies are Illegal and that makes you a commie traitor scum.. If the computer of your fellow players learn of it.. they will kill you.
What more could you ask for in a game !
Lastly on a side note. I would love to see a late night game of Paranoia at Storm-Con next year.