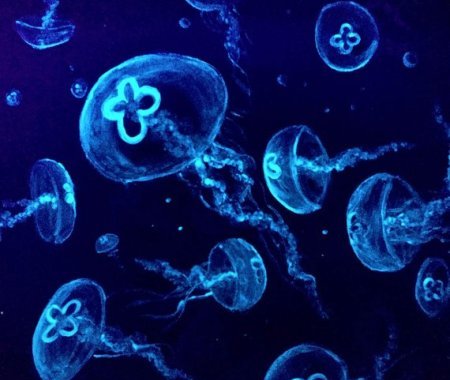 An small jelly-like being floats peacefully in the warm air currents, trailing long hairlike tendrils from its central mass.

Attach (Ex) The polyp automatically latches onto its target when it successfully makes a harpoon attack. The creature is considered grappling, but the target is not. The target can attack or grapple the polyp as normal, or break the attach with a successful grapple or Escape Artist check, if a save is successful. A polyp has a racial bonus to maintain a grapple (listed in its CMB entry).

Blindsight 40 ft (Ex) Polyps possess blindsight, they use a combination of sensitivity to vibrations and echolocation to operate effectively without vision. This makes invisibility and concealment (even magical darkness) irrelevant to them (though it still can’t see ethereal creatures).

Harpoon Attack (Ex) When a target is sensed one or multiple harpoons are launched and reeled in. The needle-like harpoon tips ‘attach’ to the target and injects an anesthetizing liquid through the tip. When the target stops moving, another chemical is injected to start the digestion process. Then the polyp, drinks the result.

Jet (Ex) A monstrous jellyfish can jet backward once per round as a full-round action at a speed equal to four times its swim speed. It must move in a straight line, but does not provoke attacks of opportunity while jetting.

Poison (Ex) Harpoon–injury; save DC 18; frequency 1/minute for 6 minutes: effect paralyzed; cure 2 consecutive saves. The save DC is Fortitude-based. The target must save per harpoon attached.

Resistance to Cold (Ex) A Polyp has cold resistance 10.

Sense Vibrations (Ex) Polyps can sense vibrations, electricity and heat within 60ft. This allows them to detect wind currents, living creatures flying by and heat thermals.

Transparent (Ex) Due to its lack of coloration, a polyp is difficult to discern. A DC 20 Perception check is required to notice a motionless polyp. Any creature that fails to notice a polyp and walks into it triggers an attack of opportunity.

The aerial polyp’s body is a translucent blue or clear hollow form resembling a marine jellyfish. An aerial polyp’s body averages 4 feet or more in diameter, while its tentacles (trailing below it) can reach lengths of around 20 ft or greater. Its body is often a gas filled bladder, when needed a polyp can expel some of this gas to put on a burst of speed. Polyps come in all colors, shapes and sizes as seen in the slideshow below.

Native the the Skylands, a polyp is an ambush hunter. They are nomadic creatures that float around the clouds and aerial islands of this nation. Due to their transparent nature and ranged attack, as long as there are creatures flying nearby they will be well-fed. When creatures in its hunting grounds become scarce, a polyp moves on to new ones.