This weeks figure is the axe beak. They are prehistoric mega-fauna, flightless birds. I researched what scientists think the Diatryma looked like and used that color scheme. I thought that it turned out well.

Below is an exerpt from the Pathfinder wiki:
“The axe beak appears like a predatory ostrich. It stands atop two powerful, muscular legs that give the axe beak much of its height. Each of these legs ends in a set of three-toed feet, each toe tipped with a sharp talon designed to tear flesh. Atop these legs is the axe beak’s broad body covered in large feathers and two short, stubby wings that clearly could not support such a large bird in flight. An elongated, feathered neck sprouts from the front of the body, leading to the axe beaks head which is bald like a vulture’s and sports the frightening sharp beak for which the creature is named. An axe beaks stands seven feet tall and, despite what their speed would suggest, these creature weigh upwards of five hundred pounds.[1]” 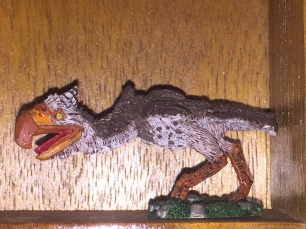 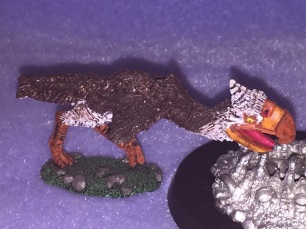