Sorry for posting this so late in the day, but this creature took me almost 2 days to research, so I could do it justice. I am in the process of learning how to use the Pathfinder process of creating monsters.

I based this creature on a currently alive microscopic animal called Tardigrade. They were discovered by Johann August Ephraim Goeze originally named the tardigrade kleiner Wasserbär (Bärtierchen today), meaning “little water bear” in German. The name Tardigradum means “slow walker” and was given by Lazzaro Spallanzani in 1776.[25] The name ‘water bear’ comes from the way they walk, reminiscent of a bear‘s gait. The biggest adults may reach a body length of 1.5 mm (0.059 in), the smallest below 0.1 mm. Newly hatched tardigrades may be smaller than 0.05 mm. 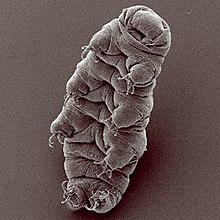 The most convenient place to find tardigrades is on lichens and mosses. Other environments are dunes, beaches, soil, and marine or freshwater sediments, where they may occur quite frequently (up to 25,000 animals per liter). Tardigrades, in the case of Echiniscoides wyethi,[26] may be found on barnacles.[27]Often, tardigrades can be found by soaking a piece of moss in water.[28]

Meet the toughest animal on the planet

They have also been in a few horror and scifi movies recently that have this creature as their monster. The most recent is Star Trek: Discovery Episode–The Butcher’s Knife Cares Not for the Lamb’s Cry. Below is my Pathfinder rendition of the water bear.

Environment any body of water

Amphibious (Ex): Water bears have the aquatic subtype, they always have swim speeds and can move in water without making Swim checks. An aquatic creature can breathe both air and water. Aquatic creatures always treat Swim as a class skill (+8 racial bonus to Swim checks).

Attach (Ex): If a water bear hits with its bite attack, it latches onto its target and automatically grapples. A water bear loses its Dexterity bonus to AC, but holds on with great tenacity and automatically inflicts bite damage each round. An attached creature can be struck with a weapon or grappled itself. To remove a water bear through grappling, the opponent must win the grapple check, or Escape Artist check against it, the water bear is removed..

While in the open water, this ability is used as a radius ability, with a range of 100 feet.

Carapace (Ex): A water bear possesses a hard shell that is an exceptionally tough and highly reflective armor. It deflects all rays, lines, cones and even magic missile spells, although area of effect spells affects them normally. There is a 30% chance of reflecting any such effect back at the caster otherwise is merely in negated. Check for reflection before rolling to overcome the creature’s spell resistance, if there is any.

Damage Reduction 10/Magic (Ex): Water Bears are resistant to any type of damage, because of their carapace. They can absorb 10 hit points worth of any type of elemental, or melee damage. If they are reduced to 0 hit points, they deflate like a balloon and feign death (hibernation).

Blood Drain (Ex): When a water bear makes a successful bite attack it’s teeth burrow into an opponent’s flesh to drain is bodily fluids at the end of each turn it is attached, inflicting 1 point of Strength and Constitution damage. The subject of such an attack must succeed on a Fortitude save or take full damage, they can save for half. The DC save is Constitution-based.

Transparent (Ex): Water bears are hard to see, even under ideal conditions, and it takes a DC 15 Perception check to notice one. Creatures who fail to notice a water bear and walk into it are automatically hit by its melee attack, or grappled; are considered flat-footed and surprised.

Light Blindness (Ex): Abrupt exposure to bright light (such as sunlight or a daylight spell) blinds a water bear for 1 round overloading its sense receptors. It must also succeed on a DC 18 Will save or retreat immediately to the deepest recesses of its lair, dropping any victim currently grappled. On subsequent rounds, it is dazzled as long as it remains in the affected area.

Vulnerability to Alcohol (Ex): Water bears are vulnerable to alcohol. A pint of alcohol poured or thrown on a water bear deals no damage but causes it to take a -4 penalty on grapple checks for 1 minute (it causes its muscles to twitch uncontrollably).

Water bears are parasites (like leaches or lampreys) from the Plane of Water originally, they came through the portal on the island of the Naga and Lizardfolk. They lived in the waters on the island until the Mage Wars, many were washed to sea when water from the portal upsurged and pushed them to the sea. Where a shock-wave hit them and mutated many of them in various ways.

They have  barrel-shaped body with 8 stubby legs. Their body is split into four segments with a pair of legs on each that have 4-8 claws per foot, the legs have no joints. Their hide is made of chitin that they molt periodically, the mouth is round like a lamprey that are like hollow needles. They are closely related to leeches and their diet usually consists the bodily fluids of plants, bacteria, or animals.

They’re able to hibernate for multiple years (1-30+) depending on how much they eat before sleeping, during which they take on a mummified state and appear dead.