So last week, just in time for my regular gaming week to start, I received my review Dragon Tray from Dog Might Games. Like always, the package arrived mummified in packing material to keep it safe. My first impression was the sheer size of this tray. The tray that the Dog Might Games crew had sent me was the “Demon” and it is no joke. It measures in at 14″ x 7.5″, is made from Flame Birch with Demon’s Blood finish, and has a Black Demon Hide lining. This tray is hard to miss. It also weighs more than one and a half pounds. The Kickstarter features 25 styles of trays. With that big of a selection, it will be hard not to find one or two that you will want. 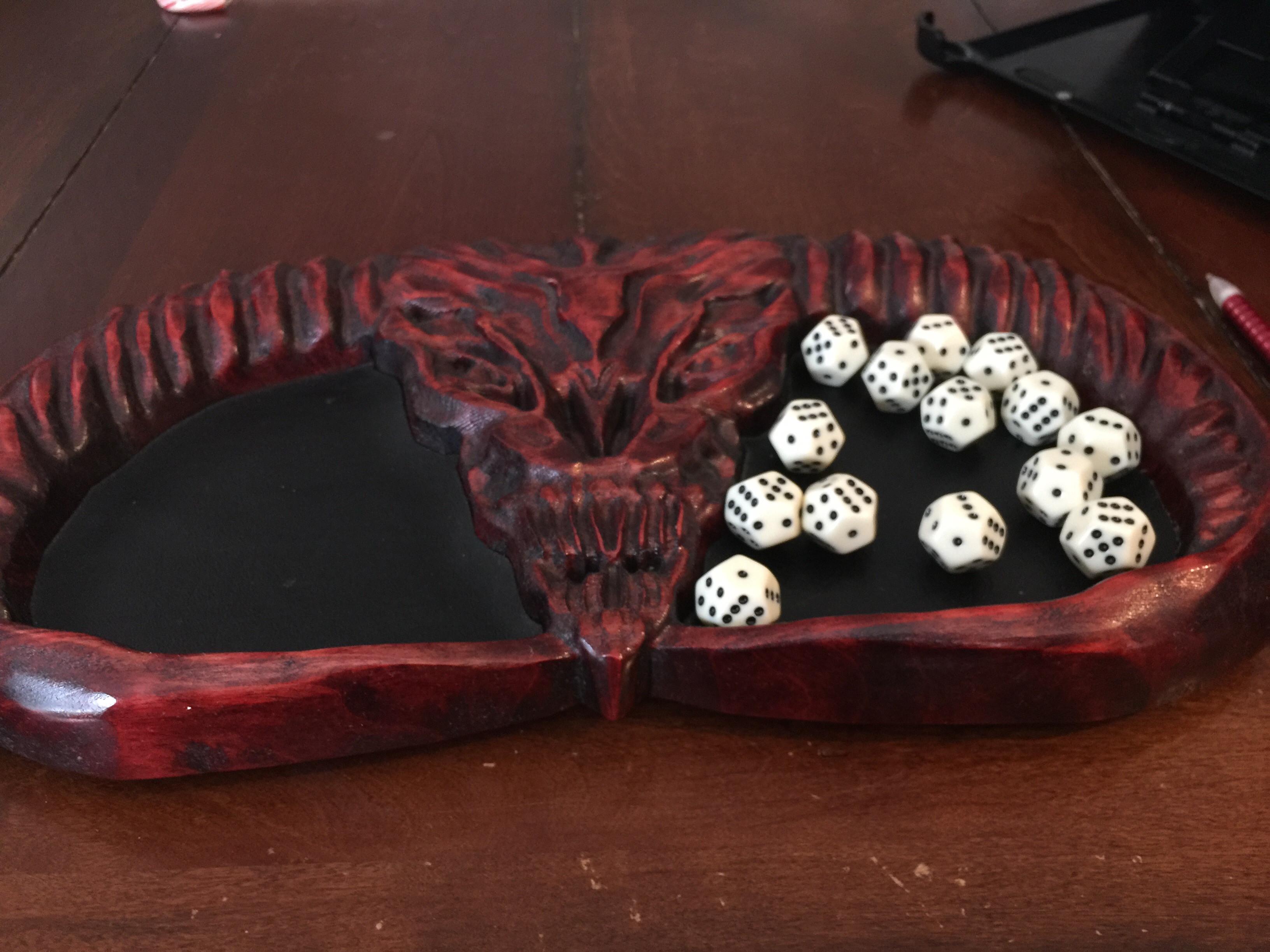 The dice wells run on average about 3/4 of an inch to 1 inch for most all of the trays. I voiced a little concern to Dog Might about the depth in the lowest portion of my particular tray. These great guys informed me that this was the lowest portion of any of the trays that they produced and that they would tweak and raise it slightly. I mention this because I want to acknowledge both the level of craftsmanship and professionalism at Dog Might Games. Not only have they trusted my thoughts and opinions to review their product, but they also valued my input on the one real concern that I had for this product.

The level of craftsmanship is clearly on display here with Dog Might Games Dragon Trays. These are works of art that you can hang on your wall to display for all to see. But my number one concern as a gamer is not ‘Does it look pretty?’. My number one concern is ‘Is it functional?’. My answer to you after several hours of gameplay with it…

I put it through a night of Shadowrun, at one point rolling upward of 14 dice, and it handled the job nicely. Away from the table, I rolled polys and Metal dice in it obsessively. These trays sit on solid rubber legs. (see photo below) These big firm feet grip the tray to the table, preventing it from sliding around and elevating it from the tabletop.This produces a few results. Dog Might will say this was done with the intent of keeping your Dragon Tray safe from spills, but I think the real reason they did it was for the satisfying sound your dice make clattering around in the tray, and it is very satisfying. Well done, you crafty lumberjacks.

That said, the sides are low. I know many of you are thinking, “But Shane, I am going to throw my dice and they are going to go flying straight out of this tray!?“. Well, you’re absolutely right. If you roll dice like a drunken monkey in a craps game, your dice will go everywhere. But if you roll your dice, not throw your dice, you will find that the dice well depth works just fine. I also would point out that I was using 14 Double D6. 12 siders. Basically, I was rolling balls into the tray and they all stayed put. So roll like a sane human and you will be fine.

If you roll dice like a drunken monkey in a craps game your dice will go everywhere. But if you roll your dice not throw your dice, you will find that the dice wells depth works just fine. I put that to the test in my Shadowrun game this weekend. At one point rolling 14 dice and not a die was lost to the table. I also would point out that I was using 14 Double D6. 12 siders. basically, I was rolling balls into the tray and they all stayed put. So roll like a sane human and you will be fine.

A benefit of the low walls is that everyone at the table can see your dice rolls. Commonly, most players will roll their dice against the far wall of their dice box. It can be hard to see the results of any rolls. If you are using a Dragon tray as a community or shared dice tray, it is easier for all involved to see the results.

With most of these trays measuring longer than a foot, they do take up some considerable table space. I know not everyone out there has the luxury of a 9-foot table. That is where the idea of the multi-wells and communal tray idea comes from I believe. Yes, a 12-14 inch tray takes up a large footprint on a table, but most dice trays are around 8-10 inches already.  If multiple players are sharing one tray, you actually are saving space at the table. I have been at several games where many players have trays. Folding trays have even recently become a hot item at my personal table of late. We now regularly see three trays on our table most nights. A Dragon Tray takes up only a few more inches than one dice tray and provides wells for two players to roll in. You can always do what I did during the Shadowrun game and used one well for rolls and the other for a staging area for my dice.

One of my personal reasons why I don’t often like or use Dice Trays is storage. If I want a Dice tray, it has to pull double duty. I want it to roll up and be compact. Otherwise, it will just take up space on my bookshelf as a bookend to my gaming collection. My cat will try and see if she can sleep in it. As all cat owners know: if it fits, it sits. Dog Might Games must not be cat lovers because they had the perfect solution. When the game is done, you don’t stick your try on top of the bookshelf to collect dust; you hang your Dragon Tray. You can hang it on the WALL!  And your awesome tray becomes art for your game room. Well played!